The future of digital engagement

The future of public relations will include: an evolved form of broadcast media, communications professionals harnessing data, and the creation of experiences which can provide real life outcomes. This was the conclusion of a panel exploring how engagement will change in future years with the use and development of digital technologies.The event highlighted key points which would underpin successful communication approaches: 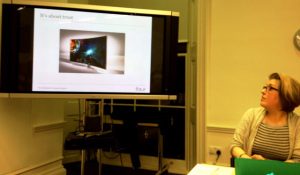 Charlotte Beckett, Director of Four Communications, a UK independent, integrated agency which has worked with a string of public sector clients, reinforced the message that digital is not about platforms, it is about people. She highlighted the power of storytelling using a case study from Skype which had most of the audience close to tears. You can watch the link from the slides in the CPD section below. The case study demonstrated how Skype used its audience feedback to reposition itself as not just a video conferencing tool but a way of creating connections across oceans and amongst people.

‘Digital is not about platforms, it is about people’

Effective digital PR she argued is about creating experiences and immersing people in a digital world, and at the same time staying focused on real world outcomes. It is about being useful to people. It is also about making sure you pay attention to detail and get the little things right as well as the big impact items.

It is also about being able to use data to create new stories and see things in different ways, and being able to make sense of measurement and evaluation.

Those working in local public services, Charlotte argued, should be amongst the ‘vanguard’ of this digital revolution which focuses on creating trust in the accuracy of information, showing how organisations can collaborate and is about enhancing local democracy. These are all areas that public services do well.

It is also not about PR being the ‘only gig in town’. In the future, Charlotte predicted, there will be a blurring of lines between PR, marketing and digital disciplines, and much greater integration. There is a need for communications practitioners and their organisations to accept that it will not be possible to ‘manage’ or develop a story in the way it may have been  previously, and there needs to be an ongoing understanding of how customers ‘behave’ and interact.

Rob Brown FCIPR, CIPR President Elect for 2016 and Chair of the CIPR’s Social Media Panel, began his talk with the bold presumption that ‘digital PR is dead’. He explained that the divide between PR and digital PR was artificial, they were both public relations.

Rob, who is Director of Rule 5, encouraged practitioners to think about public relations 10 years ago as a reminder of just how much has changed. A world where some communications offices still used fax machines on occasion and only posted out photos. A world with no social media.

10 years ago, some PR offices only posted out photos

Yes, in 2005 YouTube had just been born, Facebook was still a private network, Twitter was a twinkle in the eye and it would be another two years before the first iPhone. It may seem hard to imagine being without the tools and apps which we now take for granted.

Rob first called time on Digital PR at a presentation at Freshtival film festival in 2013 and noted that only 12 people attended the event but more than 3,400 viewed the slides.

Digital PR is no longer new, it is mainstream. When more than half of the UK adult population is on Facebook, a quarter on Twitter and LinkedIn, these platforms are major players.

Rob (pictured) demonstrated the point through running a live video feed on Twitter for the session using the Meerkat app and a mobile phone.

Rob argued that digital PR should be an integral to the way all PR professionals approach their craft, working seamlessly alongside all the traditional PR activities. For the future, he predicted:

Join the discussion: Rob argued that the future of PR lies in broadcast media. Charlotte agreed, but added it would be ‘in an evolved state’. What could this look like? Are you working on a format or experimenting with ideas?

Predictions were made that LinkedIn would become a major player, data will be a major PR commodity and subtitles will get bigger. What do you think? Share your thoughts on this site, email the LPS group or add to the discussions in our social media channels.

Charlotte recommended the article ‘The slow death of the great American newsroom’ http://gu.com/p/46nh4/stw

The digital panel event was held in March 2015, organised by the CIPR’s Local Public Services Group.

We take a look at two of the latest video streaming apps which can work alongside Twitter.

The Meerkat app provides a way of sending your live video stream from newer iPhones and iPads to all your Twitter followers by clicking ‘Stream’. If your updates are set to appear in your follower’s Twitter feeds, they will be able to receive real time updates as long as your video feed is live. There is currently no function to save or replay streams.

The Periscope app, acquired by Twitter in March 2015, is also available for iPhones and iPads. It allows practitioners to broadcast video using their organisation’s Twitter stream. When the stream is live, you can choose to notify your followers who will be able to watch the stream on the web or in the app, send comments or feedback ‘hearts’ in real time. All you need to do is to choose the Twitter bird logo before the broadcast starts. When the broadcast is over, you can make it available for replay, currently for 24 hours after the recording. Replays can be deleted. Broadcasts can also be made to specific audiences, by choosing the ‘lock icon’ before the beginning of the live stream and inviting people to your broadcast.

Abha Thakor, a Chartered PR Practitioner who has worked and advised on webcasting and live streaming for more than 15 years, gives her tips for using this technology especially for those on tight budgets. She said: “The technology is moving at such a pace that facilities that used to be beyond the resources of local public services and smaller charities and businesses are now accessible.” She shares some of the ways organisations she works with have been able to utilise the technology:

Medway Council used the app to provide a live stream on progress of a sports centre rebuild. Ashley Wilcox, Head of Communications at the Council, said: “This is changing media relations. It is so easy to use just link to your office’s Twitter account and it is done. You can stop the stream at any moment. You need really good wifi access to make it work.”

Organisations who have started to use the app include Medway Council and Camden Council. Does your organisation have an example to share?

Thanks to Mandy Pearse, Abha Thakor and Ashley Wilcox who contributed to this article and CPD resources, and to Rob Brown and Charlotte  Beckett who led the digital futures session.

© 2015 – the copyright of this article lies with the CIPR LPS and contributors to the piece and CPD resources.