Local Authority  communications teams play a key role in ensuring electoral process information is explained to the local, national and sometimes international public. These teams often work in the centre of a media frenzy and have to put facilities and material together within a limited time period. Many will often work around the clock to support and serve firstly the public interest (elections belong to the public), as well as the council officials who oversee the election process. They also have to meet the needs of a wide variety of communications channels which will be reporting on the election, both during the length of the campaign and in highly concentrated form on the count and declaration night.

The Rochester and Strood Parliamentary by-election in November 2014 received huge media interest, due to the candidacy of a high-profile defector from the Conservative Party, now standing as a potential UKIP MP. No less than 150 international, national and local media organisations attended the count, with BBC Radio Kent broadcasting all night from the venue. This figure included traditional print and broadcast media as well as newer forms of coverage – bloggers and social media commentators.

Medway Council’s Communications team’s offering started well before the night, with a media pack including a locations video filmed on an iphone. This worked well, enabling multiple broadcasters to film in advance and helped to free up time for the work of the count, rather than time being spent servicing media demands. At the election count venue, the team found that the strong imagery, large ‘Medway’ banners with graphic visual imagery of the district’s attractions, and continual use of the words ‘Rochester and Strood, Medway’, successfully helped to raise public awareness of the location. This backdrop worked well on broadcast pictures, and left viewers in no doubt about the place and its pleasant local amenities, boosting the image of the area as a visitor destination – a useful uplift for the local economy as a by-product of the by-election!

Interview with Ashley Wilcox FCIPR (pictured), Head of Communications and Marketing at Medway Council, on branding and using technology in election communications.

The resignation of Conservative MP Mark Reckless and his move to UKIP sparked one of the UK’s most contested by-elections in recent times. Described as ‘probably the last by-election before the general election’ by the media, this elevated the by-election to the top of the news and political agenda. The constituency is part of the Medway Unitary Authority area, and the Council’s communications and marketing team picked up the challenge to use this election as an opportunity to ‘Put Medway on the Map’. As soon as the by-election was called, the phones were jammed with media asking who was standing, where could they film, where could they park, how could they get count accreditation, and dozens of other questions.

A decision was taken to ensure Medway Council gave the media the best experience possible to serve the election process. We created a guide to Rochester and Strood for journalists including key facts and a short video on film locations filmed on a press officer’s iPhone. We invited broadcast media to the count venue early and worked with them on requirements. We built a camera stage, made sure they got a feed from the announcement microphone, ensured there were extra power sockets, boosted the wifi capabilities. Externally, we brought in football pitch floodlighting to make access for satellite trucks and the crews easier and safer as this was a dark and cold November night and sat trucks were positioned down a slope!

We had around 150 media organisations attend – international, national and local – broadcasters, print and online media, bloggers

“Calls kept coming and the list grew and grew – we quickly learned some journalists thought this one call meant they would get a place at the actual count. A week before we had spent a few hours explaining to some why they were not going to be allowed in to the count due to venue capacity and the need to maintain space for the working of the actual election process itself. Our accreditation list was a scientific process – it was important to segment the attenders by their roles and synchronise this with the ebb and flow of the election count process. For example, the 40 people from the BBC were obviously not all going to be there at the same time nor in the sat trucks. By doing this we could maximise the number in the hall at any one time.

“We produced a media pack (link below) for the count which had more facts, how it would work and to deal with the frequently asked questions – everyone kept calling for a likely announcement time! We used it to get a few guidelines across and to try and avoid any issues for both the election process and the different communications channels.” 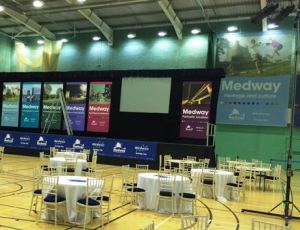 In addition to making sure the media knew the communications team were there to help (which also helped them work with the team more productively), the Council examined the branding which would be used at the count.

A timelapse video depicted both the build of the count venue and the election count. Branding opportunities were taken from images and the name ‘Medway’ featuring on everything from large banners to the big stage itself (as in the picture). Branded filming areas were set up including the reception areas as media wanted to capture the arrival of candidates. The Communications team kept reinforcing the location and the name of the authority by continuously talking to the media with reference to place – Rochester, Strood, Medway. Ashley said: “The media obviously thinks in terms of county but it was important that we showed this was taking place in Medway. It worked as both Sky and the BBC presenters said Medway and the name and images from the branding appeared in every national. Coverage was international too – all good for ‘Putting Medway on the Map’.”

For Medway the media interest continued and all major broadcasters were present for the May 2015 General Election, with many reporting nationally on the results and telling the ongoing story. Ashley said: “Working alongside the media, seeing what they needed and how this fitted in with the council’s role, and then building those relationships really worked for us. Keeping people interested is a major part of our plan.”

The three resources below are the copyright (2015) of Medway Council and have been provided as CPD items to share with communications practitioners.

Other reading and resources

‘PR and Communication in Local Government and Public Services’ – this book has a chapter, ‘Communications Teams’, which examines council elections.

Additional Reading on Branding and Elections

The inclusion of links in this list does not imply endorsement.

‘Democracy is about more than a vote – politics and brand management’ (Oxford University Press blog, March 2015

Which party would win a branding election? (Design Week, May 2015)

Analysis of Branding of Political Parties by Siegel & Gale – UK General Election 2015 (The Branding Journal, May 2015)

Brands reacting on social media to the General Election 2015 (Marketing magazine, May 2015) ‘The 2005 General

(Part of this article was first published on the localpublicservicecomms.org website in April 2015. Thanks to Ashley Wilcox and Abha Thakor for agreeing to its re-publication on this site to promote further sharing of good practice and local government communications)